As of version 0.18 nymea supports scripting using JavaScript and QML. Scripting can be used to automate behaviors, similar to rules, but are aimed towards a more advanced usage of nymea. While scripting requires a basic understanding of the JavaScript programming language, it also features a much more powerful way to interact with nymea.

It is recommended to install nymea:app on a PC in order to use the script editor.

The recommended way to create and edit scripts is the integrated script editor in nymea:app. It can be found in the mains screen’s menu -> Magic using the script icon in the upper right corner.

nymea scripts follows the QML syntax. Please refer to the QML Documentation for details on the QML language. A script can be thought of like a small app running inside nymea core. As soon as a script has been deployed to nymea:core it will be loaded and execution starts. The script might then listen to state changes in the system, or use timer events to trigger execute actions in the system.


The nymea:app script editor will report console output for the script as well as errors in the script: 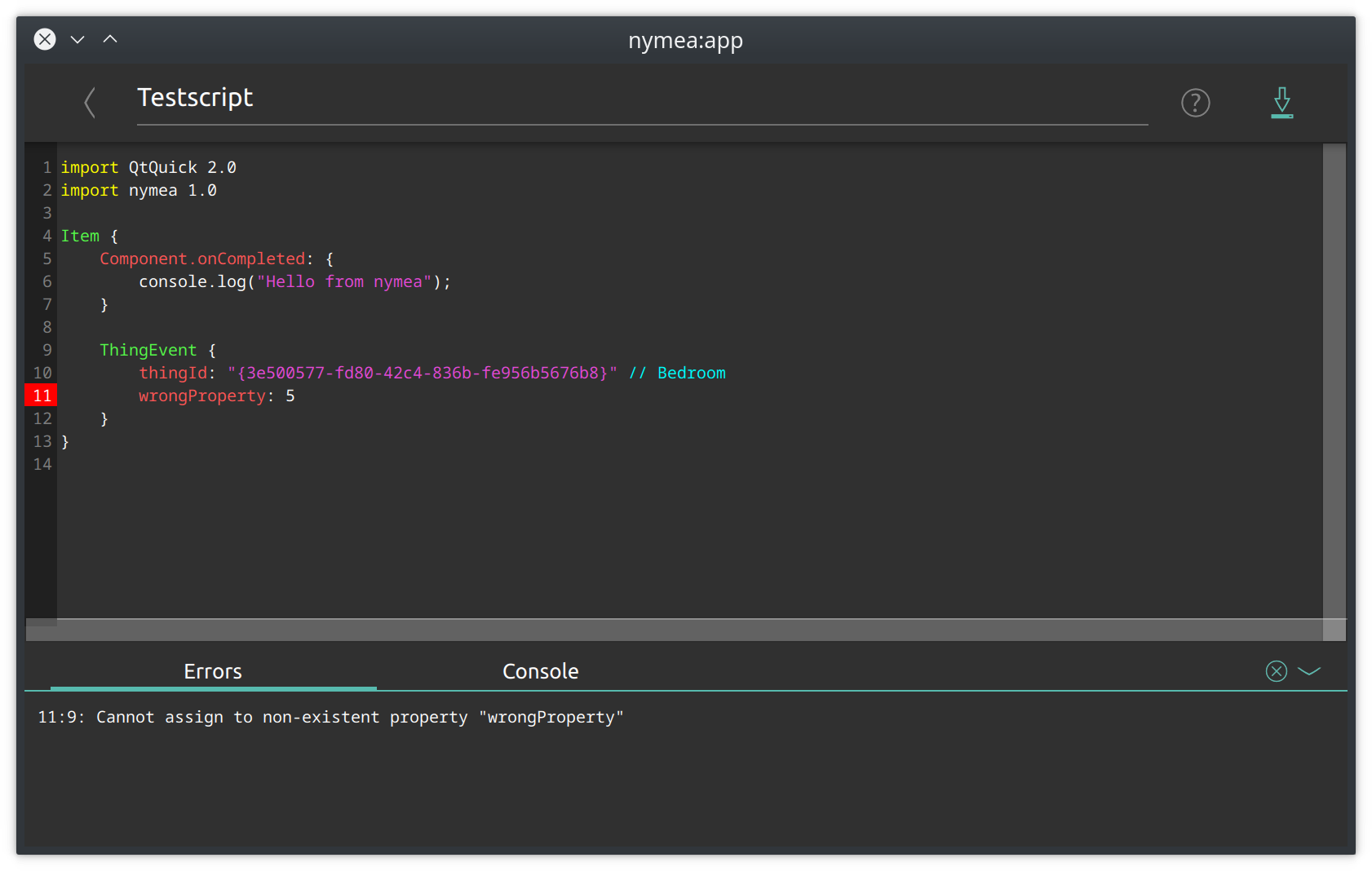 The most basic structure of a nymea script looks like this

This example script will be functional, but it doesn’t actually do anything. Depending on the purpose of the script, different content may be added inside the Item {} structure. Every script must have exactly one main item, the so called root item. This root item might contain any number of child items.

For example, in order to act on a motion sensor detecting presence, such a block can be added:

At any point while creating a script, nymea:apps script editor can support the creation by performing code completion. The code completion will pop up automatically in many places but can be invoked at any point by hitting Ctrl+Space (or Cmd+Space on macOS). 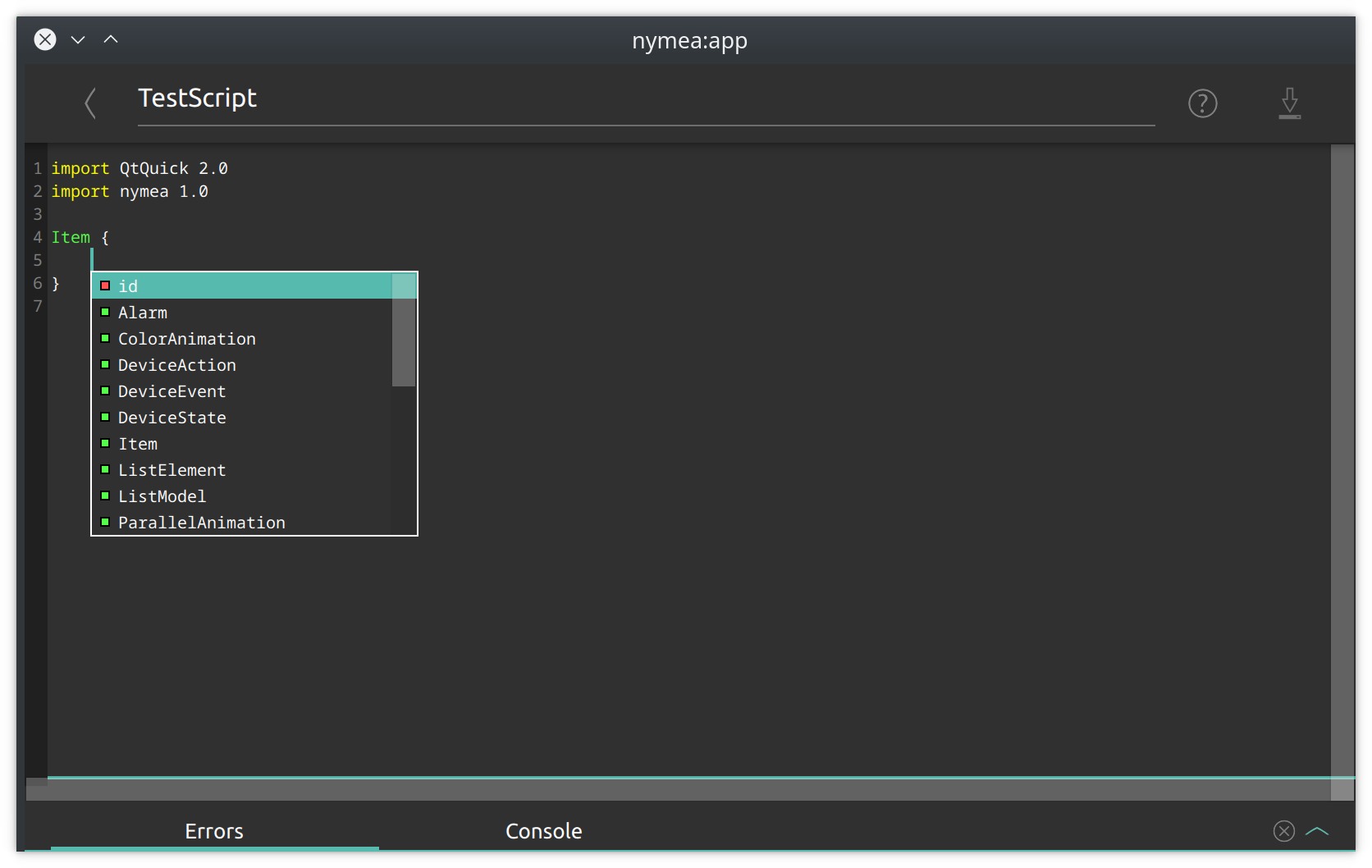 The id property is part of the QML language. Every element in QML can have an id property. The value for this can be defined freely by the script developer as long as it starts with a lowercase letter and does not contain special characters. Those ids basically give the element a name so that it can be referred to from other places in the script. It is not mandatory to add such id properties if it’s not required to “wire” up elements.

Throughout the nymea scripting, there will be the need to provide values for thingId properties. Those must be set to a UUID which refers to a particular thing in the system.

The reason for using ids instead of thing names is because the id is persistent. The user might rename a thing and existing scripts will still continue work. If we’d use the things name here, the scripts would be more fragile and break easily.

As those IDs are an implementation detail, they are not easily visible in the app, however, the nymea:app script editor provides code completion which allows to select things by name and it will automatically insert the proper ID for it.

When placing the cursor after the text thingId: " the script editor will pop up suggestions for all the things in the system. 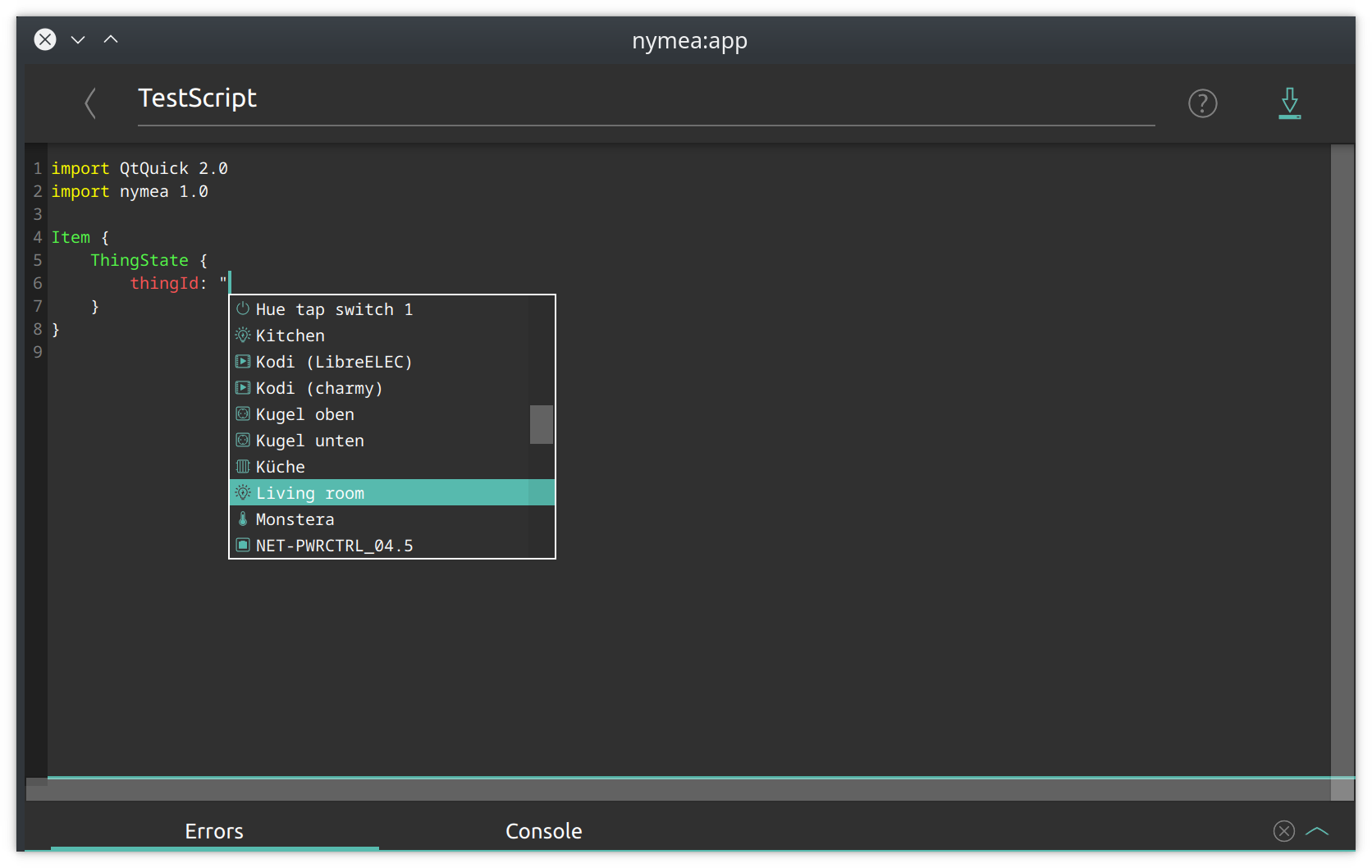 Selecting an entry will cause the script editor to fill in the appropriate ID for this ting. 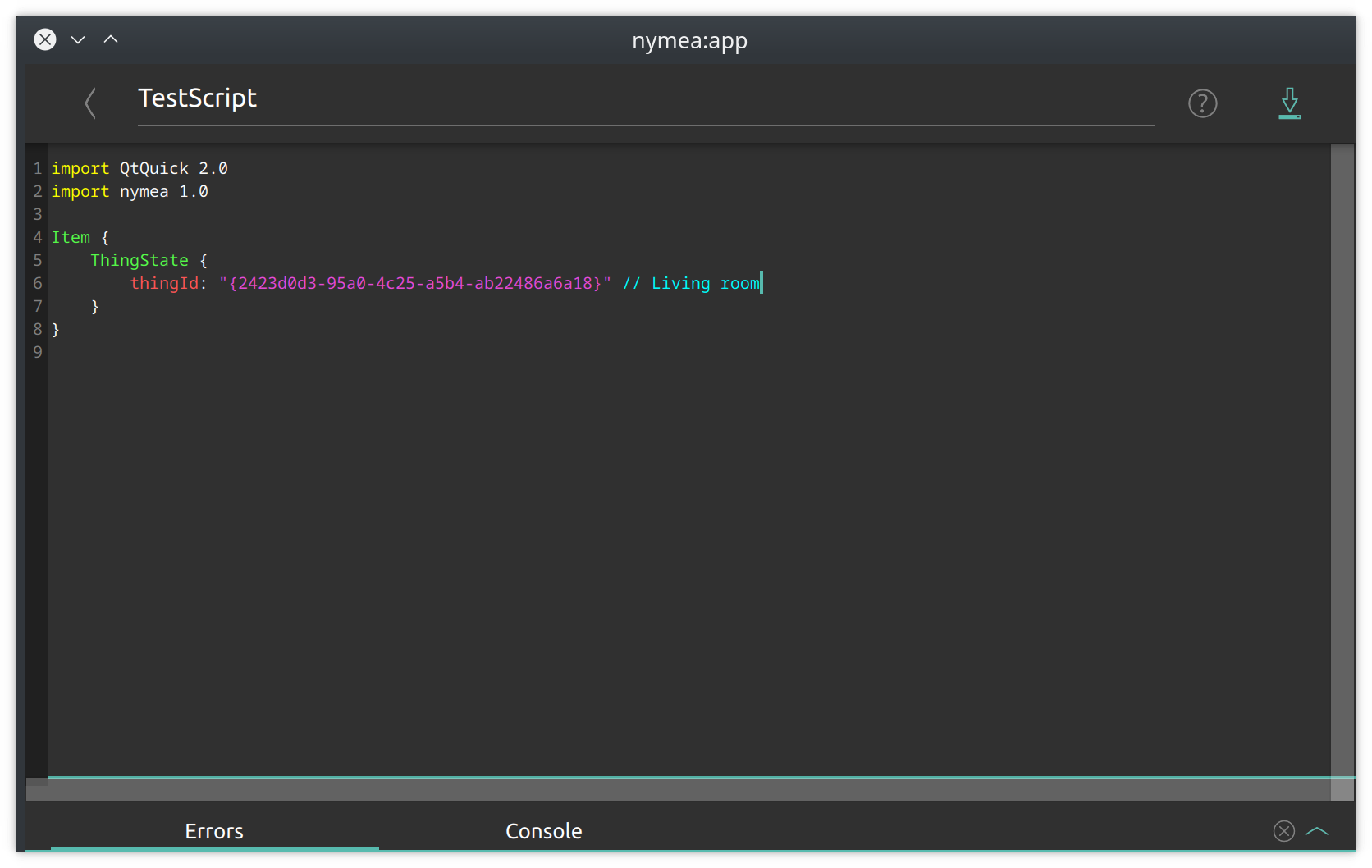 As IDs are unique to a certain nymea setup, in this documentation we’ll use

Similar to thingId, the properties stateName, eventName and actionName need to be filled in by choosing the possible values from the actual things installed in the nymea system. Depending on the chosen thingId the possible values for those differ. Please use the nymea:app code completion to get a list to chose from. 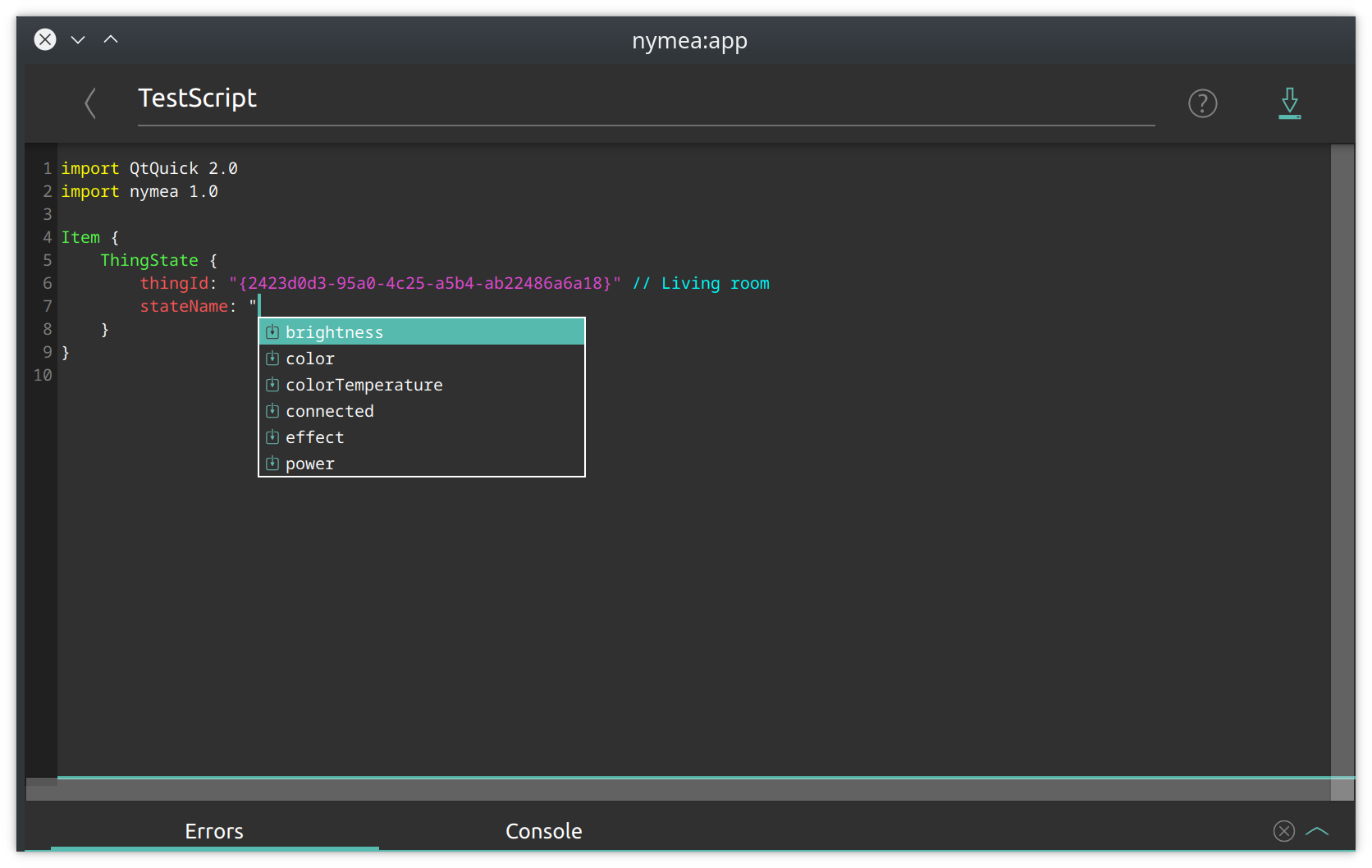 The script engine supports all the types as found in the QML Documentation. Thos most useful ones for nymea scripts will likely be

In addition to those, a set of nymea specific types are supported. The most important ones being:

A ThingState is used to read or modify a certain device’s state in the system.

In order to react on state changes, the onValueChanged signal handler can be implemented.

A ThingEvent is used to react on events in the system.

It requires to have the thingId property set in order to identify the thing we’re watching for events. In addition to that, setting the eventName property is required to select the actual event. For instance, a wall switch would have a pressed event.

A ThingEvent has a signal named triggered which is fired whenever the event happens. Using the onTriggered handler it is possible to act on those events.

The following example script would write a log warning whenever the switch is pressed.

A ThingAction is used to execute an action on a particular thing.

A ThingAction is required to have the thingId property set in order to identify a particular thing and the actionName property to match the desired acton.

A ThingAction has a function named execute(params) which can be called to actually execute the action. The params are a map for the parameters this action requires.

For instance, a thing capable to send push notifications could to be used this way:

The onTriggered handler will receive the thingId as well as the params for the event.

This might be useful for cases where a certain event is of interest, regardless of which thing it comes from. One example would be to notify the user when something runs out of battery.

A InterfaceAction is similar to the ThingAction with the difference that it executes actions not only on a single thing, but instead executes the same action on a while group of things.

For example, turning off all lights at once:

An Alarm is used to execute actions or set states at given times.

The Alarm requires at least the property time to be set. In addition to that, endTime and weekDays may be set if desired.

Whenever the Alarm triggers it will emit the triggered signal. The onTriggered handler can be used to act on it.

For instance, an alarm that triggers Monday to Friday at 7:00 in the morning can be set up with this example:

Anywhere in the script, standard JavaScript can be added. For instance we can count the number of button presses. To execute an action when a button is pressed 5 times within 5 seconds, we can use such an example:

ThingStates can be linked using a property binding. For instance, to turn on a light while a presence sensor reports presence, set the light’s power state value to the sensor’s presence state:

In this example, the light’s power state value is set to the presence sensor’s isPresent state’s value. This way, whenever the value for isPresent changes, it will automatically be synced to the power state.

Things that have events, e.g. a power wall switch that has a “pressed” event, can be used to execute an action in the system. Let’s turn on a light when a button is pressed, but only if it’s dark outside: